Posted on Mar 23, 2017 in Cetacean Ecosystems and Habitats 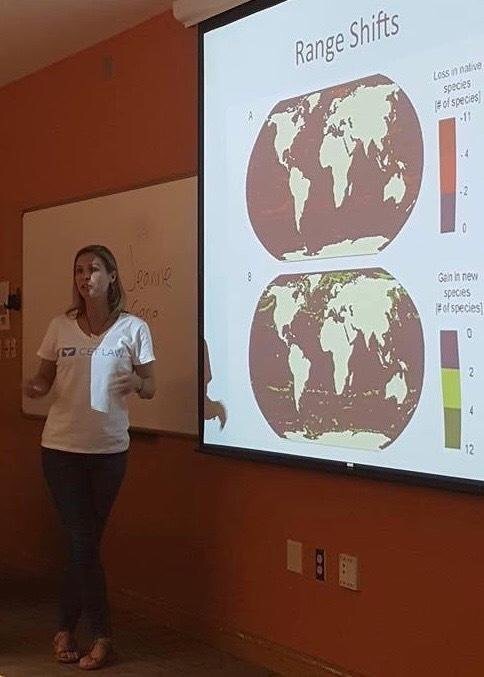 Cet Law was pleased to be invited to speak with University of Miami’s Maritime Law Society and Environmental Law Society about whales, climate change, and the law.

Climate change is not just a human problem – it is affecting our ocean, the habitat where whales live. Warming temperatures and melting ice are expected to directly affect suitable habitat and contract and expand the ranges of cetaceans. Other impacts include ocean acidification disrupting the food chains, changes in prey distribution and availability, along with increased competition from overlapping ranges with other marine mammals and increased anthropogenic activity in and on the water. Predicting how cetaceans, as migratory species, may or may not adapt to these influences in the vast and highly complex ocean is just plain difficult.

Besides shrinking our carbon footprints and slowing down global temperature rise, the most important action that humans can take to mitigate the effects of climate change on whales is to decrease the amount of non-climate stressors that we are placing on our whale populations. This means eating sustainable sea food so that it is not affecting the food security of whales, causing entanglements or unnecessary bycatch; minimizing marine debris, such as single-use plastic; keeping chemical discharge levels at truly safe levels that reflect and encompass the precautionary principle; being mindful of the amount of noise pollution in the ocean, particularly in whale habitat; and just general respectful practices that you would expect others to follow if they were in your habitat (on your land).

On the positive side, and as if you needed another reason to increase protection and conservation measures for whales, a healthy whale population can actually support climate change mitigation. Through their unique behaviours, long life spans, large body size and global migrations, whales directly contribute to the oceans ability to absorb carbon dioxide, a greenhouse gas, and store components as organic carbon. This is called “blue carbon” or carbon captured and stored by ocean and coastal organisms. The amount of carbon that whales absorb can be valued so that increased protections of whale populations is recognized for the climate change mitigation and eco-system services that they provide.

How do whales contribute to climate change mitigation? Essentially in three different ways.  First, by creating fecal plumes rich in iron and nitrogen that fertilize the surface waters and support plankton reproduction, which absorbs carbon through photosynthesis. Second, through their whale pump (the pumping of their fluke) whales continue to kick the plankton up in the photic zone where plankton is able to continue to reproduce and absorb more carbon dioxide. Lastly, when whales die in the ocean, they create carbon sinks, meaning that they fall to the bottom of the ocean and take all the carbon contained in their bodies with them, unlike, for example, trees on land which will emit the carbon that they have absorbed once they die.

Cet Law applauds the work being done around the world to better understand climate change. We will continue to work towards increased protections of cetaceans for a myriad of reasons, one being that they create a healthier and happier ocean and earth for us all to live in.