Pilot Whale Stranding in New Zealand: My Time with Cody 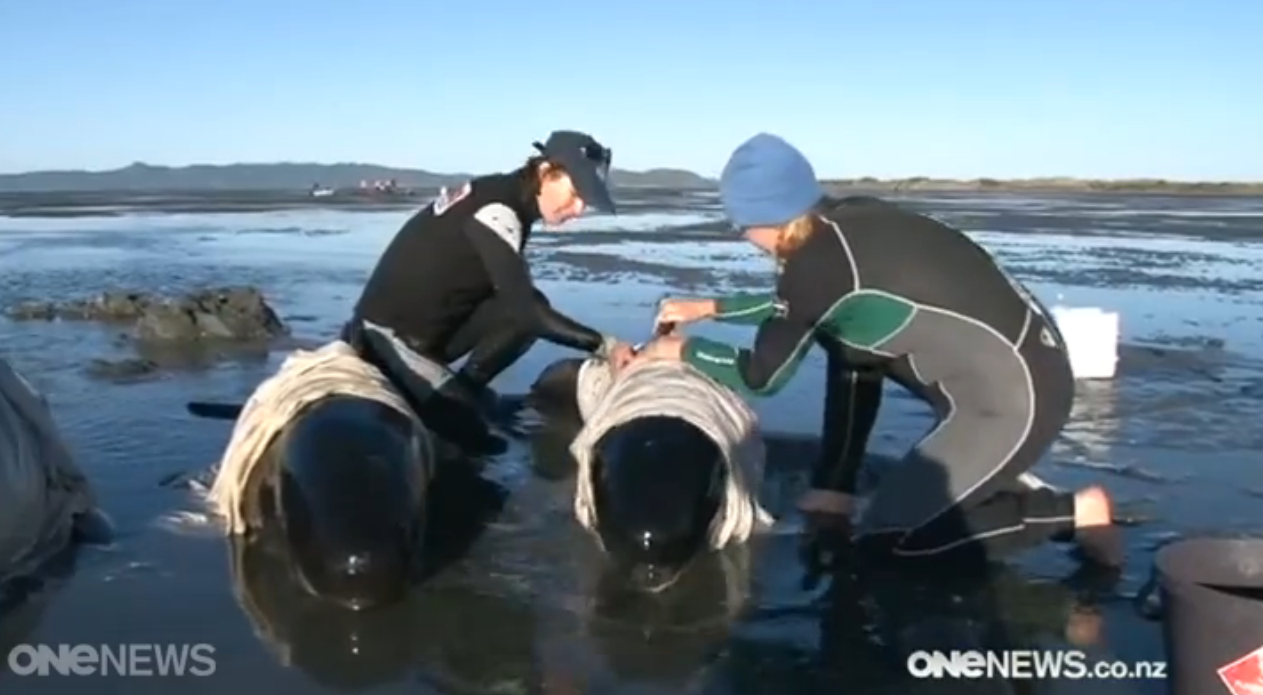 My car, a zoomy Mazda3 hatchback, is a sparkly deep dark grey, the beautiful colour of a pilot whale. She is named Cody after a pilot whale that I spent some time with in Farewell Spit in New Zealand during a stranding event in 2014. That stranding event was nothing compared to the size of the current stranding happening in New Zealand – the third largest stranding in the country with over 600 whales affected – 335 dead, 220 stranded and 100 back at sea (as of Saturday night ET). I send my thoughts and thanks to all the volunteers and professionals out there giving it their all.

The days are long during a whale stranding and the weather can make it longer and harder. The conditions at Farewell Spit aren’t kind – the tide is significant and when it comes and goes, it does so with a force so so great that volunteers steady the whales as the water rushes against them so that the whales don’t fall over. Although I would love to be lending a hand, I can’t report from the field this time, but let me give you an idea of what it was like for me on-site three years ago where I spent three days with the whales. 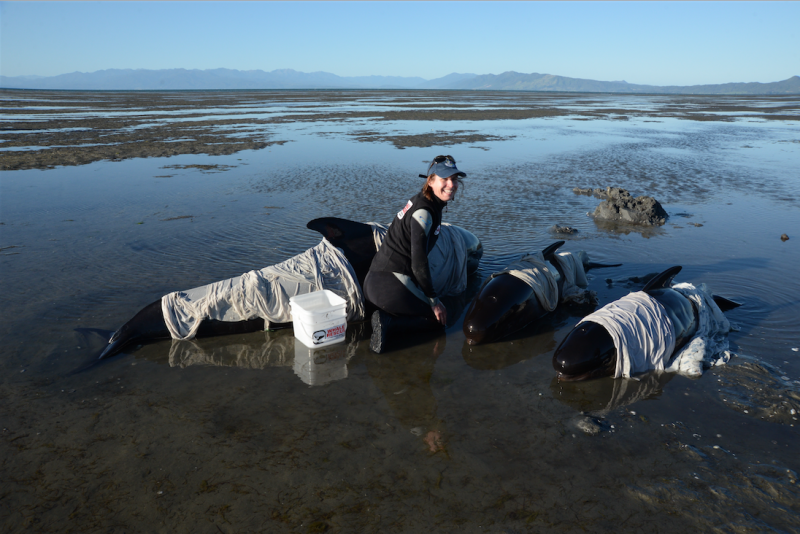 Farewell Spit 2014 – Cody and Sophia are to the right. © Orca Research Trust

This is at Farewell Spit 2014. I was there with Whale Rescue, a NZ organisation, and we worked along side Project Jonah, DOC (NZ’s Department of Conservation) and many incredible volunteers who gave of their own time and money. The two baby whales to the right of me were named Sophia and Cody – Cody is the smaller one. People may find it weird because I am smiling, but in these circumstances you go through every end of the spectrum of emotion. Because, trust me, I cried too. Particularly when we were not permitted to stay with the whales overnight due to DOC’s safety restrictions. We had to walk away from the whales that we were tending as the tide was coming in. Turning back to the pilot whale that I had sung to, listened to vocalise and had been grateful for every breath he took while I was beside him, wobble under the strength of the incoming tide, I prayed that he would make it. But he didn’t.

So I was happy to see Cody and Sophia alive that second day after leaving them the night before. The tide was out when we arrived on site and there were few people there. After shooing seagulls away that were pecking at the bodies of the live whales (yes). The first item of work is to right the whales that had fallen over. If their blowhole is covered by sand or water, they will not be able to breathe and die. Sometimes they would use sand bags or in our case, pillowcases filled with sand, to keep the whales upright and steady. 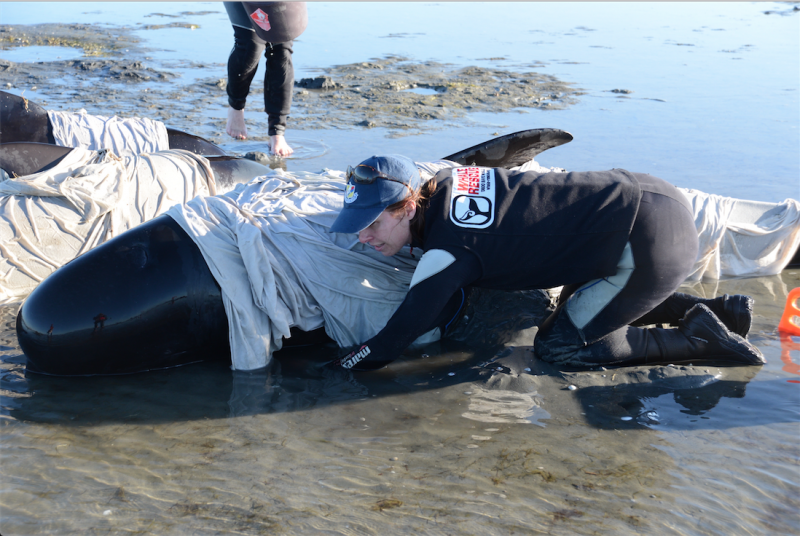 Once the whales are righted, we dig areas out from around the pectoral fins and tail, because the natural position of the whale is not flat on the ground, so this brings the whale a bit more comfort. This work of digging out is constant throughout the day because the sand returns and fills up the hole. We also cover the whales, leaving space for the blowhole, with with sheets to prevent sunburn. We keep those sheets moist by continually pouring water over the whales, which also brings them a bit of relief and cooling comfort. How do we know that this brings relief? The whales vocalize while you are with them. When you take a comforting action, such as digging out a fin or pouring water over them, you can hear them react. And so you talk with them, comfort them and unfortunately get attached. 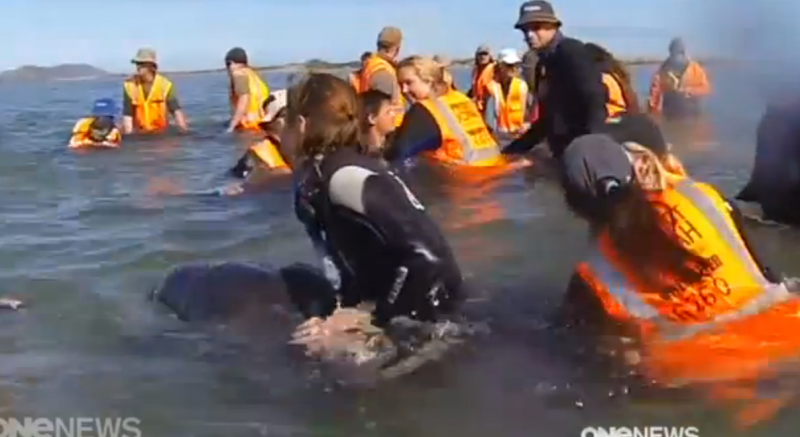 With others, I tended to Sophia and Cody for the day and then I stayed with Cody while the tide came in to refloat him. As I mentioned, the tide comes in with strength, so volunteers were with every whale. The bigger whales had 2-3 volunteers with them. Since Cody was the smallest, it was just me.  It was an incredible experience. Because he was the smallest whale, he was able to refloat and swim first. And what did he do? He went to EVERY member of the pod and vocalized to them and touched them. That day, we had 13 pilot whales in all; they were in different groupings of 1–4 and not necessarily close to each other. I was literally walking on my knees beside him sometimes 50 meters to another grouping. He knew where they were and he connected them all. It was a beautiful moment and so starkly indicative of the intelligence and strength of community bond that these whales have.

That day, the whales were refloated. We recruited some vacationers and along with the volunteers we had and made a human chain to keep moving them towards the deeper water. When the depth started to get too high, we were called in and a boat stayed with the pod. Sadly eight of the whales restranded the next day and they were euthanized except for Sophia who died on her own, which holds its own story for another blog on another day.

We don’t know why there are strandings at this particular place during this particular time of year. Dr. Ingrid Visser likens them to car crashes – there are similarities between strandings, but everyone has different contributing factors to it. All we can do is have hope and be thankful for the organisations, volunteers and government who get out there to make a difference. So sending you hope and love and thanks – to everyone out there on the Spit and to everyone cheering from afar. My thanks to Whale Rescue and Project Jonah (who housed us for the nights we were there in 2014), DOC and all the inspired volunteers who got up and did something; the work you is important and incredible and worth every heartache and victory. Thank you. ❤️ 🐳 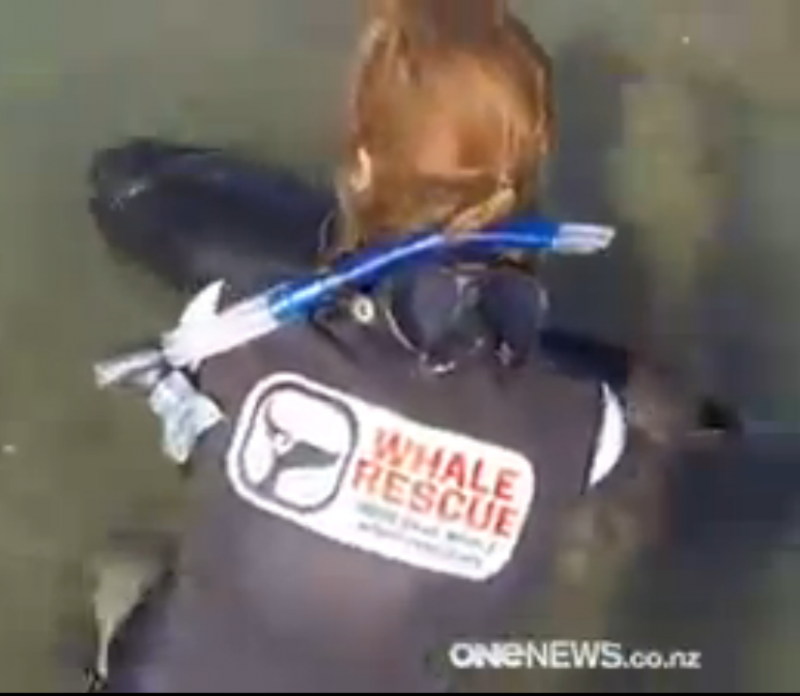