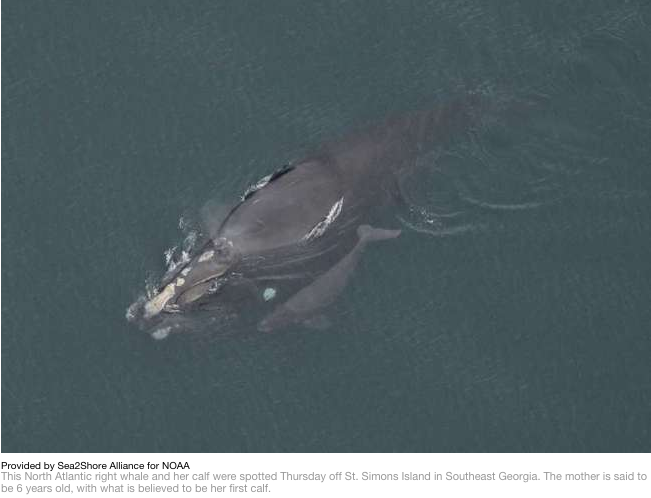 In January 2011, an endangered right whale entered the St. Johns River (Jacksonville, Florida) one morning. Not a big deal except that federal law requires boats to maintain a 500-yard distance from these critically endangered species. This meant that geography necessitated the closure of the shipping channel to Navy and commercial ships and the shutting down of the St. Johns River ferry until later that evening when the whale was observed swimming in the Atlantic. Five years later, NOAA has spotted this same whale off St. Simon’s Island in Georgia…with a calf. It is a beautiful example of exactly why these laws are in place.

We can only imagine the litany of complaints and disbelief from people and business five years ago who had their day inconvenienced, stopped, or ruined because of a whale in the river (“its not a right whale, it’s a wrong whale”). These are the grievances we often hear from those who are forced to be patient and take extra steps or spend extra money because their activities may harm or harass endangered species. These grievances are not without merit; the Endangered Species Act costs time and money, and sometimes it turns your day upside down by effectively closing a shipping channel. Equally, I am sure there were people and businesses that were inspired to go down and try to see the whale, to learn about her, or who took the change of circumstances in stride and made the most of the situation (can we relate to the recent snow days?).

Right whales received their names because they were the right whales to hunt. They are big, slow and even better, they float when they are killed, which made it easier for whalers to land the whales in the past. Because of these attributes, we decimated their populations. Although it may not have been the business owner or person of today that launched the harpoons, we, through the Endangered Species Act, have decided collectively to make efforts to conserve this critically endangered species estimated by NOAA to be at a population of just over 450 (2015 figures).

If we had not acknowledged her presence and stopped traffic, would it have made a difference that day? We do not know. However we do know that those efforts bore fruit, as we now have one more right whale in our ocean thanks to that day and every day that these animals were protected and respected. That is what this law was meant to do. And it worked.